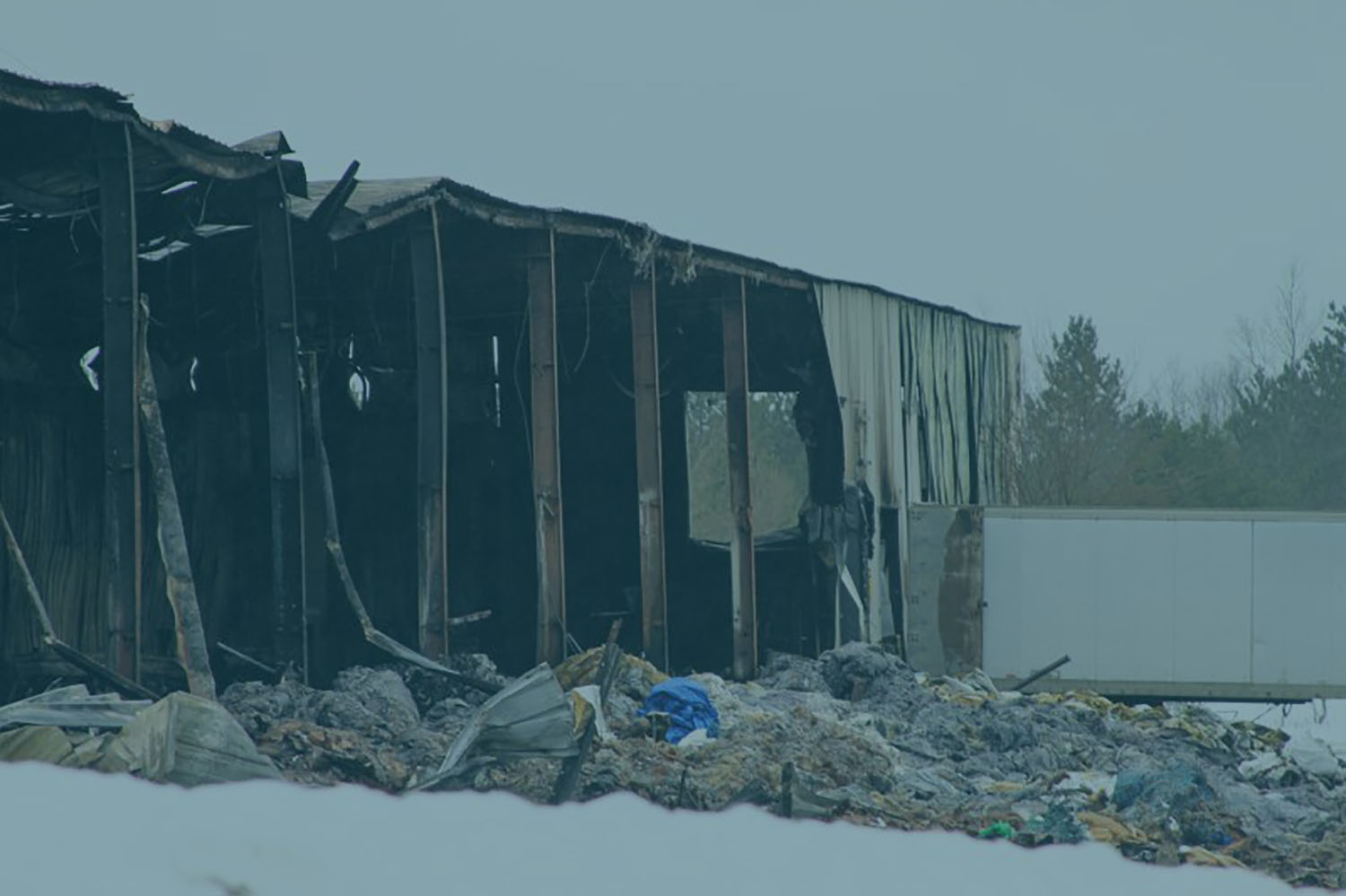 KALEVA — After a blaze left most of Kaleva’s Bay Area Recycling for Charities building in ruins on Tuesday afternoon, the company is now searching for ways to continue its mission.

Andy Gale, BARC founder and president, said the nonprofit, which offers comprehensive waste management services and compostable products, is not giving up hope.

The company’s founder said he is determined to work past the devastation, which is now left in ashes.

“We are not going anywhere,” said Gale. “Something started a fire out there. I don’t know what it was, but they are sending (an official) out there to do a full investigation.”

At the time, Gale said BARC was renting the building at 14407 Industrial Drive — which formerly housed NABCO —  and had plans to use a loan to purchase it next week. He said the plan could have brought around 50 to 100 more jobs to the Kaleva area.

More than 20 years ago, NABCO, Inc. held its grand opening celebration at the building, where it re-manufactured starters, alternators and solenoids for the automobile industry. NABCO permanently closed its distribution and production operations in 2006.

In June of 2017, BARC expanded and opened a location for its recycling business at the old NABCO building. Gale started the company nearly 10 years ago with only one truck, which soon grew into one of the largest recycling businesses of its kind in the Midwest.

Working toward a zero-waste vision for society, BARC recycles items like electronics or mattresses, and donates a portion of its profits back to local charities.

“This is the only mattress recycling location in the state of Michigan,” said Gale.

Four employees were in the building at the time of the fire; however, all were able to make it out safely.

“The most important thing is that everyone got out safely,” Gale said. “The firefighters contained that fire so well.”

The building was engulfed in thick smoke that later erupted into intense flames, which swallowed the southwest end of the building — destroying the entire loading dock on the west side.

Although the fire was nothing short of a crisis for BARC, Gale said only an eighth of the 82,800 square foot Kaleva Industrial Park building was scorched, leaving plenty of mattresses, electronics and refrigerators untouched.

The rest of the building suffers smoke damage; BARC’s insurance company is currently assessing the damage.

“There was a bit of a miracle, as only 10,000 square feet of that loading dock was burned,” said Gale. “The firefighters kept that fire in that area, so it did not burn the rest of the stuff inside the warehouse part of the building.”

In wake of the fire’s destruction, BARC is now accepting donations from the community to help it carry on its mission.

On its Facebook page, BARC posted a statement: “Many of you have asked what you can do to help. As you can imagine, we will be facing some challenges as we move past this crisis.”

Donations can be made on the Bay Area Recycling for Charities webpage, at mybarc.org/make-a-donation/. Gale said donations help to pay BARC’s employees, the clean-up crews and business overhead.

At this time, the cause of the fire has not yet been determined. Calls to Maple Grove Township Officials, who are heading the investigation, have not been answered.

Sign up for our newsletter to learn about our programs, happenings in our community, and volunteer opportunities.